With an entire city to digest I decided a good place to start would be to get on the “hop on, hop off” city tour bus. They circulate every 15 minutes and for one extra pound you can get a two day pass (so 16 pounds vs 15)….of course I then promptly dropped my ticket at my first hop-off spot…oops…likely it fell out of my pocket as I was digging for tissues to stop my seemingly perpetual runny nose.

So learn from me – keep your ticket and your tissues in separate pockets. Fortunately the next bus driver let me on but said other drivers would likely require me to purchase a new ticket. Oh well.

My first stop was the Riverside Museum by Zaha Hadid. Completed in 2011, the building pulls inspiration from the waves formed by the confluence of the Rivers Clyde and Kelvin. The museum is free and houses all manners of transportation mechanisms, from bicycles to caravans to models of ships. Glasgow was a ship building epicenter; at it’s peak it is estimated that they were producing 25% of the worlds ships, with launches occurring every two days.

The museum sits on the old shipyards, long since demolished. I may have been a little preoccupied with the building to really pay the attention that was due to the magnificent amount of exhibits. A model of a city block was complete with horse-drawn trolley and stores that you could explore and learn about saddlery, cobblery, photography (of the old time-y sorts) and a subway.

Mostly what I was thinking about was how simple Zaha’s interior finish schedule must have been. A brilliant move considering how complex every other detail of the building likely was.

The next stop was Kelvingrove Art Gallery and Museum, also free to the public. They had a special exhibition on Charles Rennie Mackintosh on the ground level that has a small fee. By the time I got to it, it was getting a bit late, so I am keeping that on my potential to do list. I have a few other Mackintosh stops to make…so perhaps it calls for a dedicated Mackintosh day. 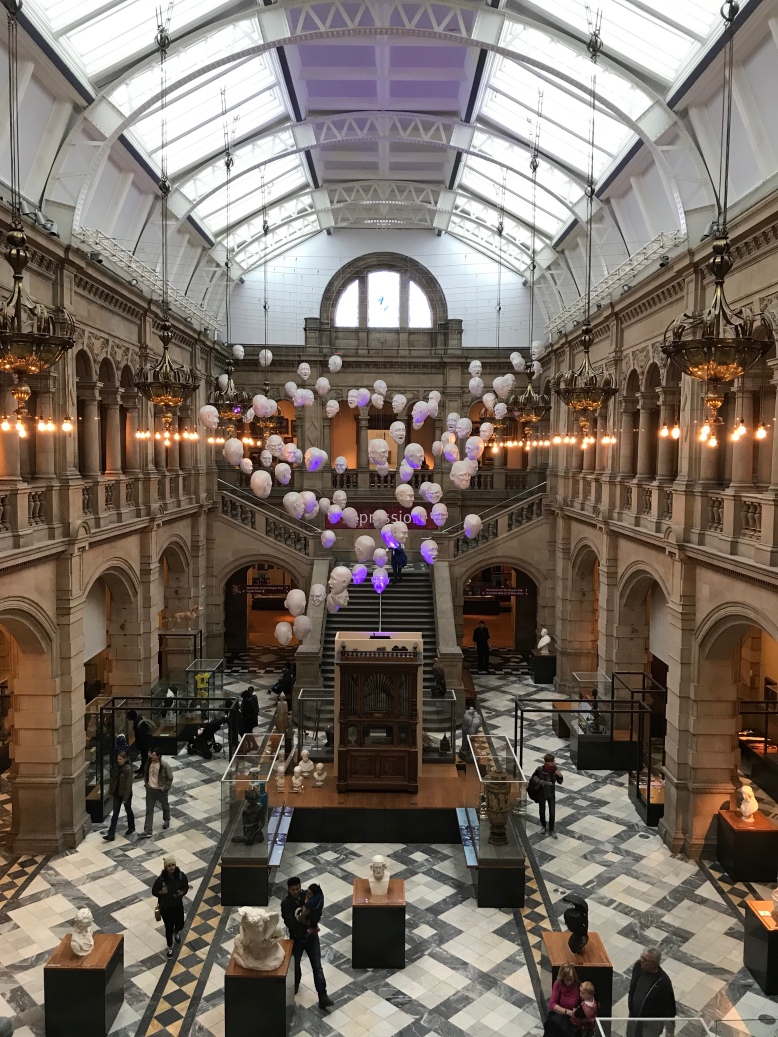 The galleries had a plethora of art and heritage objects. There were Scottish-specific rooms with gorgeous paintings, furniture and textiles; natural science rooms with things like stuffed elephants and pre-historic skeletons; a room full of armor from warriors all over the world; a French room with pieces by Monet, Van Gogh, Gauguin, and many others; and if you hate all of that, there is a giant pipe organ….really there has to be something for everyone in this building.

After leaving the Kelvingrove, I decided I would walk back to City Center. The day had been kind of choreographed that far and I had lost my bus ticket after all. I, of course, chose the drizzly part of the day to walk around, but contrary to what my Grandpa used to tell me, I am not made of sugar, so I was fine. I picked interesting steeples and towers in the distance and found out if I could get to them.

After a while I realized I was unable to see the skyline through the gray skies. At that point I was pretty sure I had gotten myself good and lost. But then I ended up stumbling upon the Speirs Wharf and canal trail.

What you can’t tell from the photos is that the canal is actually about 20-30 feet above the ground just to the left of these photos. And the path was labeled with plenty of signage leading me back to the City Center. If you go the other way the canal connects to the Falkirk Wheel and there was signage about the canal being a Glasgow to Edinburgh canoe trail. That would be fun!

After dropping things back at my hotel I decided to squeeze in one last museum, the Gallery of Modern Art, which I passed yesterday. There were some interesting pieces…but I found I was mostly interested in the building.

The statue out front of the GoMA is the Duke of Wellington on his horse, Copenhagen. You may notice the traffic cone on his head. Apparently the police have stopped trying to remove it as each time they did, it reappeared. It has now become an icon of its own in Glasgow. The GoMA was originally the site of William Cunninghame’s 1777 home; he was a tobacco baron. He had plantations in America until the Revolutionary War. It was sold to John Stirling in 1789. In 1817 it became a branch of the Royal Bank of Scotland and then in 1827 it housed the Glasgow Royal Exchange. The signage in the building indicates that they aren’t 100% sure if the original Cunninghame home was incorporated into the later additions/alterations, but just from a walk around the outside, it appears to me that the original window pediments match the drawings of Cunninghame’s home. I ended the day with a hearty meat pie and chips at “The Citizen”, a restaurant named and sited inside the first Glasgow daily newspaper.